In 2018, it seems odd anyone would call their business after the generic name of a product. “Cupcakes,” like “milk,” “bread,” “nuts,” or any other single word you could look up in a dictionary, is hardly SEO-friendly. That may be one reason why it’s so hard to figure out exactly what happened with “Cupcakes,” the tiny chain of stores in Vancouver that sold, well, cupcakes, and had a moderately successful faux-reality series on the W network, The Cupcake Girls.

But in 2002, when Lori Joyce and Heather White started Cupcakes, I imagine SEO was less important. At the time, they claimed to run the only cupcake-specific shop in North America, a competitive advantage that would have been to easy to copy, and was. Somehow, despite the fact that Joyce and White — if their direct-to-camera recollections on The Cupcake Girls were to be believed — knew nothing about baking or business, their enterprise managed to survive.

The Cupcake Girls was a strangely addictive, although frequently irritating, show to watch. It was one of those programs where you could imagine the pitch meeting that got them on the air. “It’s a show — about us! How we make cupcakes! We’re best friends and we know nothing about business!” When time came to film, the proprietors probably pushed back, to say, “Well… we don’t know nothing about business. We want to be relatable, but impressive! We’re fun girls and we have business savvy!” The result was a hodge-podge of recreated scenes, with non-professional actors doing rehearsed dialogue.

Off-camera, the cupcake brick-and-mortars were still in business. One sort-of in my neighborhood, that I would walk past and casually think, “Still there. Hasn’t closed up shop yet.” That feat alone was indeed impressive: in a high rent area, where the commercial landscape had perhaps a half-dozen overhauls since they first opened, to stick it out along with just a few other local shops was no small accomplishment.

I ate one of the cupcakes once. It was as you would expect, a cake-like substance with thick frosting.

Today, the location near me had a bit of a different feel as I walked past. Perhaps it was the emptiness that was just a bit too empty, the hallmark of a shop that isn’t trying to be chic with its roomy interior. The numerous window signs displaying a single message: “Closing Sale.” Inside I could see a small display with sprinkles on sale for $3.00. 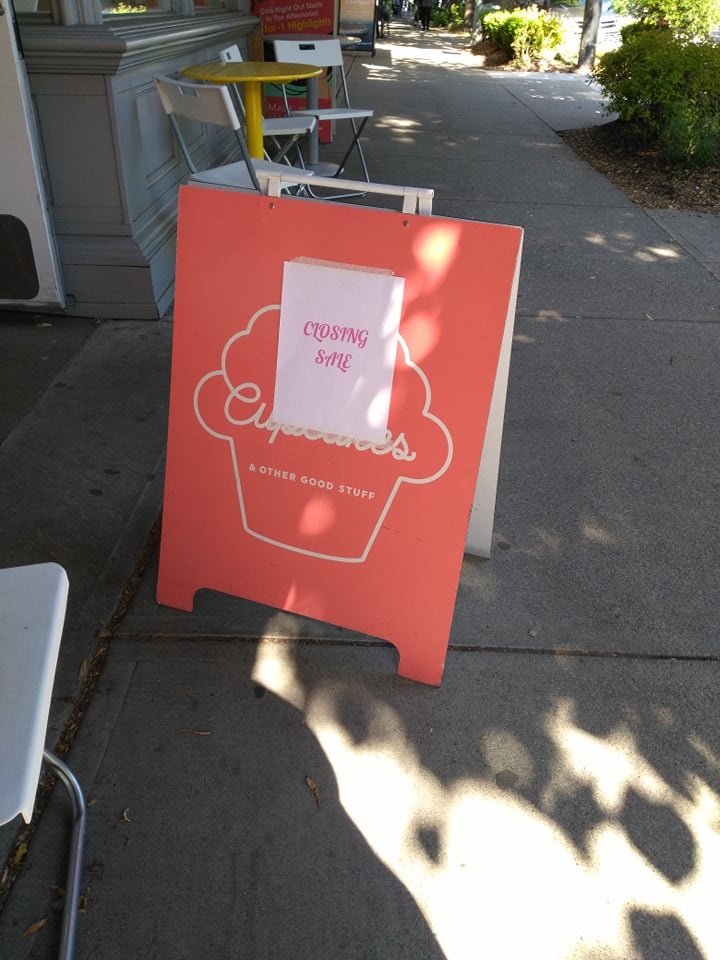 Of course, there would have been one easy way to figure out what happened to Cupcakes. I could have walked in the shop and asked, but that would have meant buying something (out of courtesy). And in Vancouver, we don’t do that. We don’t just ask stuff. We’re a pretty anti-social city, so it didn’t even occur to me to do anything other than browse online to see what was going on with Joyce and White, whom I never exactly envied when I watched The Cupcake Girls, but whom gave me my first bits of small business financial wisdom.

(During one episode, White revealed that in the early days, they knew nothing about cash flow. They would make sales in the front and immediately use the funds to pay suppliers in the back.)

The Cupcake Girls was also my first job as a background performer, and it was a bad one. We weren’t paid, instead recruited as “fans” through the Cupcake Girls Facebook page. It was a long, boring day, during which we had to play disgruntled customers. I found out later that boredom and discomfort is typical with background work, but extras are usually fed and paid. It was quite miserable, but that’s the fault of the production company, to be sure, and not the women themselves, whom I didn’t recall ever being on set. (An email from the producer to me later revealed that, if I’d stuck around long enough after filming wrapped, I would have gotten a free cupcake.)

The most telling piece of information about the fate of Cupcakes came from a Georgia Straight mention this past March, when another Cupcakes location, in the West End, shuttered its doors. In that article, it’s noted that Cupcakes went through a relaunch in June 2016 in conjunction with a new ice cream brand, Betterwith. A month later, Joyce left Cupcakes to run Betterwith. According to her LinkedIn profile, that’s when her time with Cupcakes finally came to an end, 14 years after the brand’s founding. A Straight article at the time of the relaunch quoted White as saying the pair had spent the prior two years trying to come up with a complement to cupcakes, and ice cream was it.

Last year, Joyce was featured in a Globe and Mail article that touted Betterwith’s distinctive feature: being made with traceable milk. According to the article, most milk on the market comes from pooled sources, meaning it’s a mixture of milk from different farms. Therefore, it’s almost impossible to tell where it comes from. Joyce found a way around that problem, by working with a few small farms and dairy producers already distributing traceable milk. Joyce told the Globe that she may soon run out of product because demand is strong and she planned to hit sales targets of $1 million for the first year, up to $40 million by 2020. Betterwith says that the cows are happy, something they can confirm because they can visit the farm where they live.

(I’m skeptical that “happy cows,” and traceability, at least when it comes to dairy, is enough of a competitive advantage to keep Betterwith in business, but that’s an aside.)

The Globe article is suspiciously silent on Joyce’s exit from Cupcakes, except noting her time on The Cupcake Girls and that she was using her “minor celebrity” to promote Betterwith during in-store demos.

As for White, her LinkedIn bio still names her as a co-owner of Cupcakes. But she’s also the co-owner and founder of The Russell, a restaurant in Kansas City, Missouri. So she may be spearheading Cupcakes on paper, but maybe she’s not even in town.

So The Cupcake Girls may have finally gotten out of the cupcake business, but they had an undeniably good run. Even though I never did get a free cupcake for my time as an extra, I hope they had a lucrative and peaceful exit from their chain.

This site uses Akismet to reduce spam. Learn how your comment data is processed.